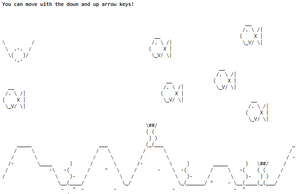 The beginning wave of The Sea

The Sea is a dungeon that is accessible after completing the cave entrance. To get to The Sea, just enter The Pier and then click on the Jump into the sea button.

Because the sea is an infinite level, if you leave it or die, you will always keep the candies and the treasures you find. You can find the Shell Powder, Magical sponge, Magical green shark fin, Magical red shark fin and the Magical purple shark fin exclusively in The Sea

There are many enemies in The Sea. There are big fish at first, and then some small fish. After a while, jellyfish will start to appear. Then, sharks and sea snakes will swim by. There can be a mix of these animals as you go along.

Enemies in The Sea spawn in waves. These waves are mostly fixed, with some random choices between two or three possible waves.

The Shell Powder and the Sponge are generated independent of the waves.

Distance note: A tile is the width of an ASCII character (a letter, number, or other symbol). The status bar at the top of the page has a width of 100 tiles. The Sea moves at 10 tiles per second unless the player is blocked. 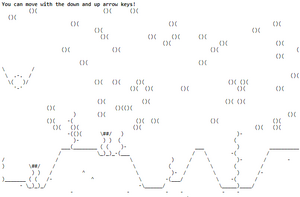 A wave of small fish

Two waves (possibly same) for 100 tiles each, randomly chosen from: [3]

A large group of Small Fish spawn in a pattern, for a distance of 50 tiles. Randomly chosen from squares, crosses or lines. [7][8]

Five Seahorses spawn at the right side of the screen, which do not move horizontally. Four Seahorses are stationary, and one moves vertically with the player. All Seahorses spit out blue fireballs straight forwards which do a large amount of damage, so avoiding these is critical.

The wave ends when all Seahorses are dead

Two to three big Sharks for a distance of 125.

This exploit can get you a large amount of candies from The Sea. The exploit uses the octopus minion to attack enemies, which provides you with a steady flow of candies. These are the steps to pulling the Octoking Infinity stunt off: