Candy Box 2 is a sequel to the original Candy Box game by aniwey. It is planned to be released online in October 24th, 2013.

The sequel was first mentioned on a page on aniwey's website which said the game should include: 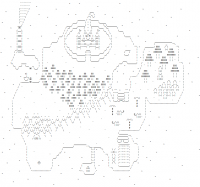 The world map for Candy Box 2

NOTE: As the title implies, this is only a speculation about content that might be in the new game, according to hints given online by Aniwey. The speculations might not be precise, and are not a reliable source of information. Most of details are taken from the official Candy Box 2 Blog.

The game will include a number of new creatures and characters, with the known ones being Lolligator (A type of an alligator with a lollipop-shaped tail), Troll, squirrels and "a naked monkey wizard". The troll appears to be an enemy, because of its health bar and the fact its defending the bridge and blocking the player's way.

The game will explain some things, like "What is this Candy Box?" and the magical source of where the candies come from will be revealed.

There will be a number of new weapons and items, organized in many different types of equipment pieces- Weapons and Body Armors are the one that being mentioned as an example. Also, it appears that you can only select one weapon to go with every quest (even though there are a lot of weapons to choose from), so the same thing might be with Body Armors, and so on.

One of the weapons will be a kind of a Tribal Spear, as you can see in the picture.

A stats bar in the inventory page including max health, sword damage, and other useful statistics.

The game probably won't have a "game over", or a permanent death that will force you to restart the game. However, it is planned to have a hard mode, which is much more difficult than the regular play.

Based on the two releases screenshots of Candy Box 2 we see that the top bar contains your health, lollipops, map button, save button, candy box button, a text that says "You have ??" and an inventory button. We don't see any candies in the top bar.